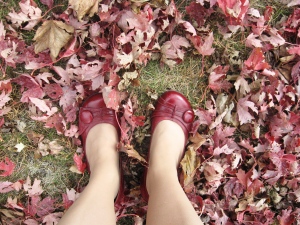 This weekend found me hunting for clothes pins and gourds in a corn maze by flashlight, attempting to teach fourth graders about the Bible, screaming like a girl in the haunted house in the church basement, celebrating Zoe’s baptismal birthday some more, and wearing my Very Favorite Ordination / Reformation / Pentecost Shoes through two worship services and a potluck dinner.  No wonder I’m moving even more slowly than usual this Monday morning.  I mean: Monday afternoon (see what I’m saying?).

Zoe was also moving slowly this morning, in the sense that running around the house while your mother attempts to feed and dress you is “slow”.  But: she was beyond thrilled to don her beloved bumble bee costume.  So much so that she resisted other parts of the outfit, like pants.  (Pro tip: call them “bumblebee pants” and you are good to go.)

She perched adorably on her Big Wheel tricycle, but of course I couldn’t find the camera.  So, here are a few photos of her outside of day care, where I tried to make her pose after we picked up the camera from Grandma’s house (no wonder I couldn’t find that thing).

Waving bye bye to Daddy, who was waiting in the car. "He's not driving away!" she said, apparently disappointed that he was waiting for Mama.

More and better photos to follow, I hope.  If we are very lucky, she may even keep the antenna on for more than three seconds in a row.

Filed under Your Moment of Zoe

One of the perks of having a small child is that, at least for the first few years, you pretty much get to dress her however you want.  (The child herself is a pretty big perk, too.)

This is especially fun at Halloween.  I am excited for the year (next year, perhaps) that Zoe chooses her own Halloween costume, but I am also worried that she will want to be a butterfly doggy dinosaur princess or Dora-Yo Gabba-platypus or some other tricky thing like that.  (Although, upon ten seconds of reflection, those both sound sort of awesome.)

So this year, we are going for simple, recognizable, and adorable: Zoe the Bumblebee.  The main components of the costume arrived in the mail this week, and Zoe was instantly smitten:

Upside down sunglasses not included and too-small hat to be replaced with antenna headband (a “crown”, according to the bee herself), but you get the idea.  She immediately put it on to watch Yo Gabba Gabba and would be wearing it right now if I let her.

But since I am not interested in handwashing a bee costume before Halloween, she will have to content herself with the antenna crown and its accompanying bow tie and tail.

There’s just something magical about dressing up.  I remember my “old-fashioned girl” costume in second grade, complete with hoop skirt (painstakingly assembled by my non-sewing mother).  Except for maybe my wedding day, I don’t know when I’ve felt more beautiful.

When Zoe looked at herself in the mirror (in every mirror she could find), she grinned and said softly, “I can fly!”

Filed under Your Moment of Zoe